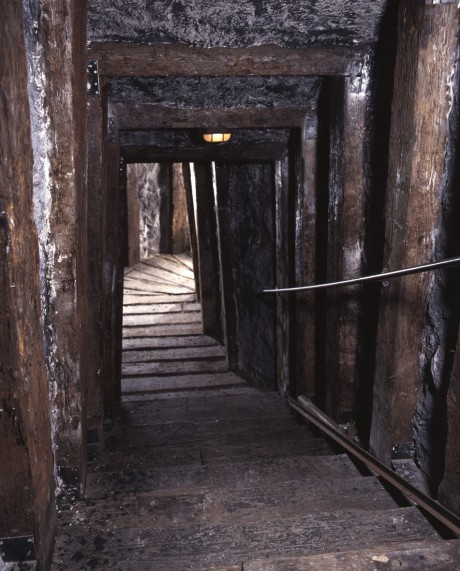 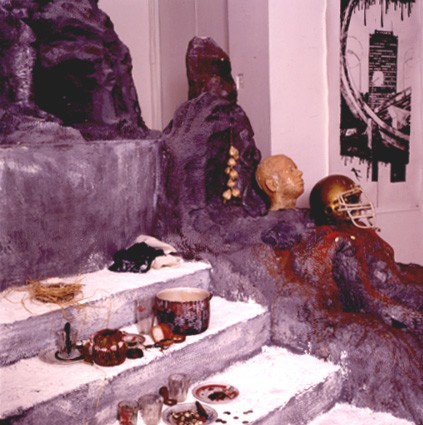 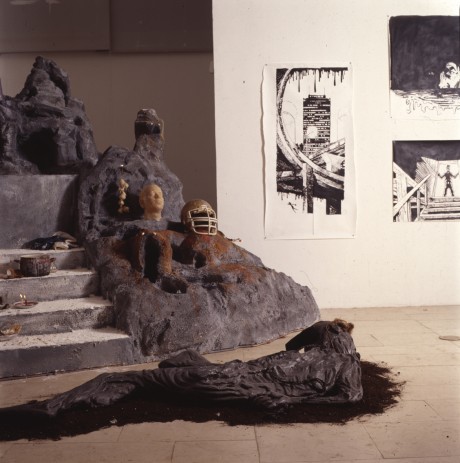 Karen Russo’s work opens with a staircase leading down to the exhibition space, a passage that physically “initiates” the viewer into the installation. This descent leads into a kind of mine, a cave in the earth which, for Russo, represents hell, madness, the kingdom of darkness and irrationality. The space contains, side by side, scientific facts and para-scientific data, archaeological finds and elements from folktales, horror stories, movies, and the world of rock stars.

One of the central figures in this installation is based on an archaeological find of a human sacrifice discovered in a swamp in northern Sweden. The victim, executed by someone from a foreign culture, is rediscovered after a large time gap in a place that is saturated in mud-like material and suffused with memories of a hidden culture. At the heart of Russo’s installation is a wooden shack which contains the doll-like figure of a bedridden, crippled, and mute girl flanked by her parents. Through the window, a demonic figure can be seen taking flight. Russo has written an accompanying story about a young woman who has undergone the traumatic experience of rape in her childhood, which has left her mute. Years later she is raped by the devil, and at that exact moment she realizes that the man who raped her as a child was her father. This “enlightenment” causes her to shout and regain the power of speech. From another corner of the space, the voice of a teacher can be heard, talking with the police from a hiding place in the Columbine High School in Littleton, Colorado, after two students held a “revenge” massacre for having been ostracized by more popular and sports-oriented students. In yet another part of the installation, Russo has placed stuffed animals, remains of scalped heads, and wild ritual objects reminiscent of the voodoo altar in Francis Ford Coppola’s film Apocalypse Now. In the film, the site was used by a hidden community within the rain forest, and especially by their leader Kurtz, who was motivated by feelings of loathing and revenge towards Western society.

All the elements of the installation are remains from and evidence of tribal sacrificial ceremonies that feed on embrace revenge, fury, and primal urges. Russo seems poised on the edge of an explosion of tribal desire – but always at the moment after the occurrence, after the blood-thirst and ecstasy have been satisfied. For Russo, the tragedy is not in the moment of catharsis, when all sense of form, demarcation and limit is lost; rather, it is in that which remains afterwards – in the physical body and presence of the victim, who has already been mutilated by someone from a distant culture. Russo moves from the figure of one victim to that of another, thereby distancing herself, one step at a time, from the particular circumstances of the actual murder. Thus, each additional figure in the chain of “dolls” shown in the installation points to a meaning concealed in another irrational and gloomy place similar to a mine or swamp.