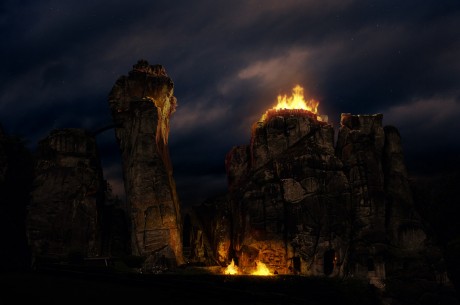 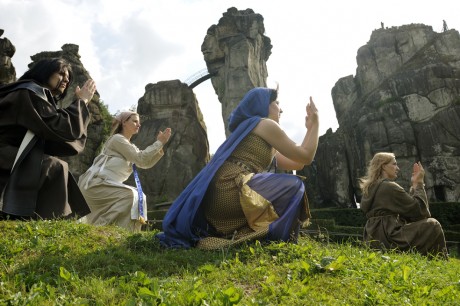 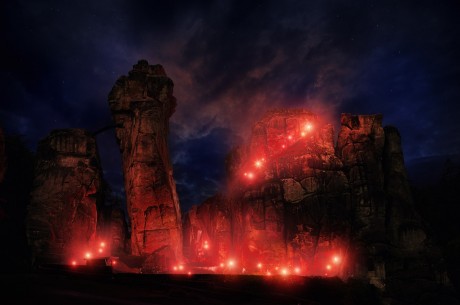 "Externsteine" takes as its subject the rock formation in northern Germany which attracts both neo-Pagans, New Agers and neo-Nazis to seasonal celebrations, in which each cult relates Externsteine’s extraordinary landscape to their own version of ecological, spiritual and political mythology.

An undeniably mysterious place, Externsteine is thought to have been a pagan Germanic cultic shrine until 782 AD, subsequently used by Christian hermits throughout the Middle Ages. Although the pre-history of these rocks is largely unknown and archaeological digs have turned up little, Himmler nevertheless identified the site as sacred to the ancient Germans. Pulled into the bizarre space where Nazism and occult pseudo-history overlapped, the actual history of Externsteine was overshadowed by an entirely imagined ancient Teutonic history. To this day, it still attracts German nationalists and Neo-Nazis.

Using documentary and fictional means, “Externsteine” unravels how German Romanticism, contemporary political extremism and new-age spiritualism rework different ideas about history, myth, nature, community and human identity. While presenting documentary encounters with individuals connected with the site – anti-Nazi officials, historians, archeologists, esoterics and others – it also plunges the viewer into a semi-fictional encounter with the landscape and those who inhabit it, spinning the archaic practices of present-day cultists into a narrative of utopian communities of the future.

Footage was filmed during the celebrations of the Night of the Witches (a pagan ritual) and summer solstice and consist of interviews and documentary footage of ritual ceremonies and activities conducted at the site. This is mixed with staged scenes, including a Nazi-Yoga session based on ancient Runes, and ceremonial scenes (using extras) - some of which reference Kenneth Anger’s Lucifer Rising, which was partly filmed at Externsteine. Woven throughout is a poetic narration about utopia, illuminating the romantic, weird or destructive social codes of those who inhabit Externsteine.

The visual language recalls the work of the German Romantic artist Caspar David Friedrich: the prevalence of fog, diminutive human figures, and compositions that deny the spectator an easy point of access.Yet, while the sequences that linger on this beautiful landscape are stunning in their own right, they awaken the spectre of German nationalism and evoke the cinematographic language of the Third Reich (which depicts a pre-modern world of pastoral landscapes that relies heavily on the iconography of 19th-century German painting).

Operating between documentary, anthropology and science-fiction, Externsteine looks at archeology’s central role in shaping a nation's spiritual capital and the way it is used to confirm political narratives. As such, it explores the ambivalent position of monuments, which derive their social meaning from the way they are perceived.

Is it possible to take myth seriously on its own terms, and to respect its coherence and complexity, without becoming morally blinded by its poetic power?How much myth is good for us? Can we, as a society, develop a “constructive” approach to myth? And what would that be?