The Crown Cinema welcomes its viewers to attend screenings in the COVID-19 era, with three single-viewer screening halls: a momentary refuge of alternative, imagined, or documentary reality, a brief pause from a heady summer season in which the ruling crown is slipping and cracking, the streets of the city are filled with demonstrators, and the world is hanging in limbo and uncertainty.

The Crown Cinema features mostly films selected and screened over the past decade (2010-2019) at the Experimental Cinema and Video Art Competition in the framework of the Jerusalem International Film Festival. The competition is a unique space in the Israeli context for the screening of contemporary experimental video works. The films selected each year are screened alongside films from outside the competition chosen by the curator. Through subjects ranging from architecture and control, through history (real or imagined), utopias, distopias, Israeli reality, to the body and nature, and using an experimental cinematic language, the films are part of an ongoing dialogue, a critical or fantastic array of gazes on contemporary reality.

In days in which governmental institutions are collapsing and a pandemic is threatening the familiar paradigms of our existence, the Crown Cinema invites the viewer to to sink into the coolness of the theater and the comfort of its cushioned seats, and at the same time to cast a sober gaze at the reality of our lives; under the seductive cloak of the movie theater, 30 video works by local artists allow us to peer into the cracks - a powerful weapon in times of change.

The spectator is invited to choose her/his own hall and screening program. The duration of each program is about one hour. Entrance according to availability. 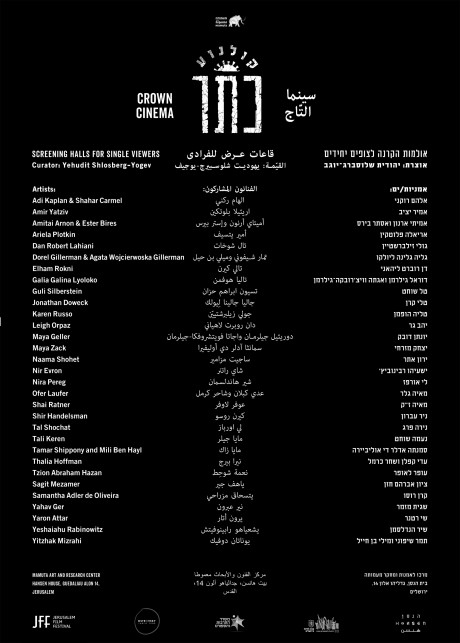