Scared rituals are at the heart of this new cycle of video art. The theme of rituals take us to habitual patterns and acts, but also to a darker realm where actions and activities have underlining meaning yet one that is not necessarily understood; its inner logic is visible, even if at times this logic is not fully available to those who are only observing this activity.

In Woodworld, an early piece by the famed artist Olaf Breuning, a static camera is watching over a large car, which is parked in the middle of a dark mysterious forest. The atmosphere around the car is constantly transformed by a series of light effects – a disco ball, blue light or flashing lights, and smoke, bubble and snow machine. At the end of the video the occupants of the car, wearing dark clothes and mask-like makeup, peer towards the viewers before they themselves use flashlights to add to the mesmerizing visual effects. The reason to this excessive activity is unclear, thus takes the viewers to the realm of ritual.

Through the technique of digital montage, the juxtaposition of images and sounds, Hinda Weiss creates surprising connections as she weaves together still-image and film, silence and noise, the city and nature. In After the Desert Goat, Weiss uses montage to create symbolic atmosphere as the arid landscape of the desert is depicted as a wasteland with emblematic associations.

Karen Russo’s new work Junkerhaus continues the artist’s interest in the relationship between the irrational currents of culture and the quest for logic and rationality. Junker House was filmed in the house of the 19th-century architect Karl Junger a space that appears to be controlled by its maker’s fantasies and imagination. Russo’s film transforms the house into a claustrophobic maze where its decorative and architectural details undergo a material transformation, as they are dramatically animated with light and quick editing.

Tamar Hirschfeld uses use fire as her main motif. In Judean Mountains the artist utilizes off-centre framing and handheld camera to depict a woman who “plays with fire.” The result appears as a dance or a fight, as the protagonist positions herself in relation to the fire, nearing and moving away from its heat. Storm by Mai Omer depicts a group of youth squatting in an abandon building during a thunderstorm the reason for their presence and activity in the site produce an atmosphere of mystery and danger. 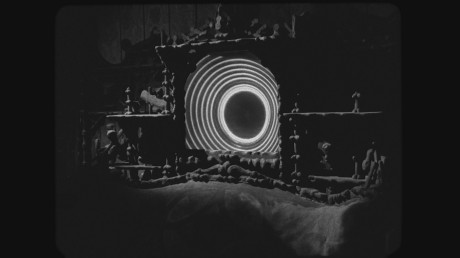