Junker House takes us into a space which, while very real, is entirely the product of one individual’s imagination – a visionary, mystical inner world made into a material one. Shot on 16mm b&w film, it offers us an accumulation of fragmentary visions of the insides of a building, one where architecture, furniture and ornament flow into each other. Sculpted wood dominates, fashioned in a style which is an uncanny hybrid of gothic line, folkloric handcraft, primitivist totem and organic form, while the house’s walls bear naïvely painted murals which recall arcadian scenes of renaissance frescoes. It is a building one might find in a fairy tale, lost, as it seems, in forest of pines.

Junker House is shot in the private residence of architect Karl Junker (1850-1912) who dedicated his life to building his house in Lemgo, Germany. Junker made his house his life’s work, cocooning himself within a maze of elaborate wood carvings that extended over all floors and into all corners, and even the furniture, like a spider’s web – a hand-crafted manifesto of a creative solitude.

Russo’s film offers a claustrophobic view of this mysterious warren of spaces, in which it seems impossible to draw back and take an objective overview. Rather than seek objectivity, however, Junker House makes its subject warp and dissolve, as reflections and projections make the heavy, roughly carved wood flow like liquid, and dramatic changes of illumination animate surfaces and structures, while making them seem to disintegrate.

This fluidity, fragmentation and lack of perspective suggests that we are not in the social, rational and functional space of conventional architecture. As we progress through the film’s timeline, we encounter models and fantastical illustrations of vast buildings and cities. Reality and Imagination loop back into each other, and we begin to wonder if, inside the model edifice rotating in the shadows, there might not be a room containing another model, and so on to infinity.

Junker’s life and work, situated in the late 19th and early 20th century, can be understood as part of the period’s artistic interest in the gesamtkunstwerke - the total work of art. But Junker’s project cannot be reduced to a reasoned, aesthetic experiment with total architecture. Nor can it easily be framed as the eccentric outpouring of a madman, a schizophrenic, or an ‘outsider’ artist (as Junker has sometimes been described).

Russo’s Junker House emphasises the porousness of the division between the imagined and the real in the world that Junker had invented. A world of a personal fantasy, in which a family he did not have are given space in rooms that remain uninhabited. That porousness, between inner hermetic vision and material reality might itself be inscribed in the style Junker adopted. The traces of gothic and baroque style we detect appear mutated by an even more archaic, pagan or organic force (in vivid contrast to the more sober architecture we occasionally glimpse outside). Russo’s Junker House, with its nuanced use of monochrome 16mm film, reimagines the house’s interior if it were a kind of organic body. The strange lack of definition in Junker’s handcraft, which Junker House pays such close attention to, has the indistinct, hazy power of a dream image. This indistinction also connects it to the organic, natural world of woodland and landscape we see; the lattices of branches and brambles echoed in the trellised structure’s Junker’s interiors. In Junker House, bodies and buildings, and matter and memory, constantly interact and combine.

Junker House closes on a singular image. It is of a painting mounted in a small cabinet, a painting of a bearded, top-hatted man, who resembles Junker, outside an open window looking into a room, where he finds a woman and a little girl who greet him. Behind the man, in the distance, are town buildings. It is the world Junker perhaps wished for himself; the return of a family he had lost, living happily in a world that would soon exist, if only he could build it. 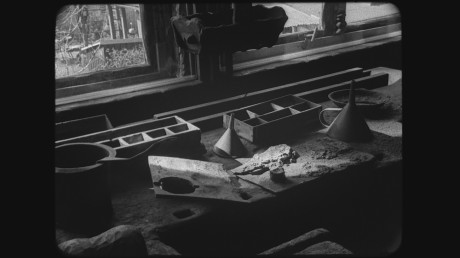 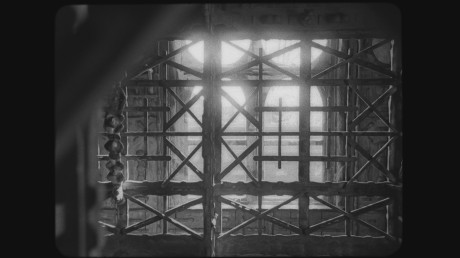 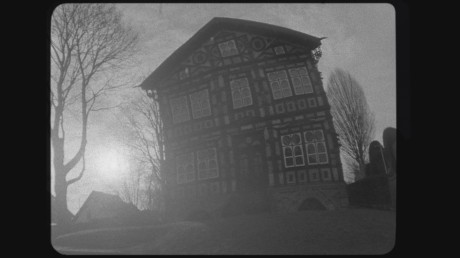