Meditations on a Triangle (2010), is comprised of a video and a three art objects. It explores the application of the technique of ‘remote viewing’ – the psychic ability to see and describe remote geographical locations, or ‘targets’ – to the exploration of outer space.

The video work centres on an attempt by a Remote Viewer to psychically access an undisclosed target, using only a set coordinates as a reference. These coordinates were given to him by a monitor presiding over the Viewing session. A printed image of the target – the painting “Variegations in the Triangle” (1927) by Wassily Kandinsky – remained hidden in a sealed envelope nearby, to be revealed at the session’s end. During the Viewing, the Remote Viewer’s impressions were documented and these notes were then delivered to three artists, Mark Titchner, Shezad Dawood and Jeremy Millar. In different ways, each artist’s work addresses questions of religion and spirituality, para-psychology and mysticism and their relation to ideas of modernism. Russo asked these artists to create new works based on the visual descriptions provided or respond to the process.

In their responses, each artist freely projects his own preoccupations and interests: Dawood thinks the description suggests a sort of temple, atop a mountain from which issues a waterfall. Mark Titchner’s response to the reading involves putting himself into a trance, using a ‘dream machine’, the meditation device first designed by the beat poet Brian Gysin. Jeremy Millar’s sculptural structure makes reference to the Kabalah myth of the ‘Metatron’, a configuration of circular forms organised to produce the schema of an immaterial cube, in which geometric and ‘minimalist’ forms converge.

Remote Viewing was originally developed during the Cold War as part of the Stargate Project, a CIA sponsored research programme into potential military applications of paranormal phenomena. In a series of experiments conducted by the physicists Russell Targ and Harold Puthoff, human subjects of a range of psychic ability were asked to follow a protocol during which they had to view and then give information about remote geographical targets such as roads, buildings, and laboratory apparatus. The accuracy of the descriptions was astonishing, and far beyond what might be accounted for by coincidence. Targ and Puthoff’s results suggested that Remote Viewing is a latent and widely found perceptual ability which can be taught and practiced by anyone.

Meditations on a Triangle seeks to examine new ways of making art which are not based on normal perception and raises a number of questions about the nature and definition of the art-work, such as:
Can Kandinsky’s spirit be communicated unconsciously by his contemporary successors? And if so, does it affirm his mystical and spiritual ideas?
Is there an essence or a core to an art work which can be accessed by people and can be communicated? Can that energy in time and space be captured and be articulated?
What is left of the original representation made by Kandinsky? What’s lost between the inspiration, interpretation and then the re-expression of the piece?

Meditations on a Triangle 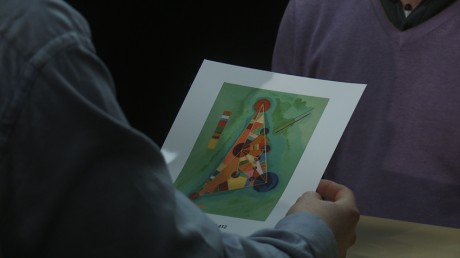